The 15 Most Followed Companies on LinkedIn in 2019.

It’s evident that LinkedIn stands out from the rest of the social media networks, and this is mostly to do with the type of content that is being shared on LinkedIn. With more than 30 million company profiles on this platform, LinkedIn has emerged as the best business-related social media network.

Nobody can say no to having an impressive looking fan follow on their social media networks and that applies to company pages on LinkedIn too.

Below, you will find the 15 most followed companies on LinkedIn, sourced from the Unmetric platform, and what makes them so follow-worthy on this network.

The list includes big corporate companies with a large pool of employees and a wide umbrella of companies/brands under them. So naturally, they come with a large follower base and an even larger consumer base. Google is one company that needs no introduction, so it comes as no surprise to have Google at the top of the chart. The company added close to 11 million followers on LinkedIn since 2014, a 400% growth in followers with an average of 5,980 followers added per day! 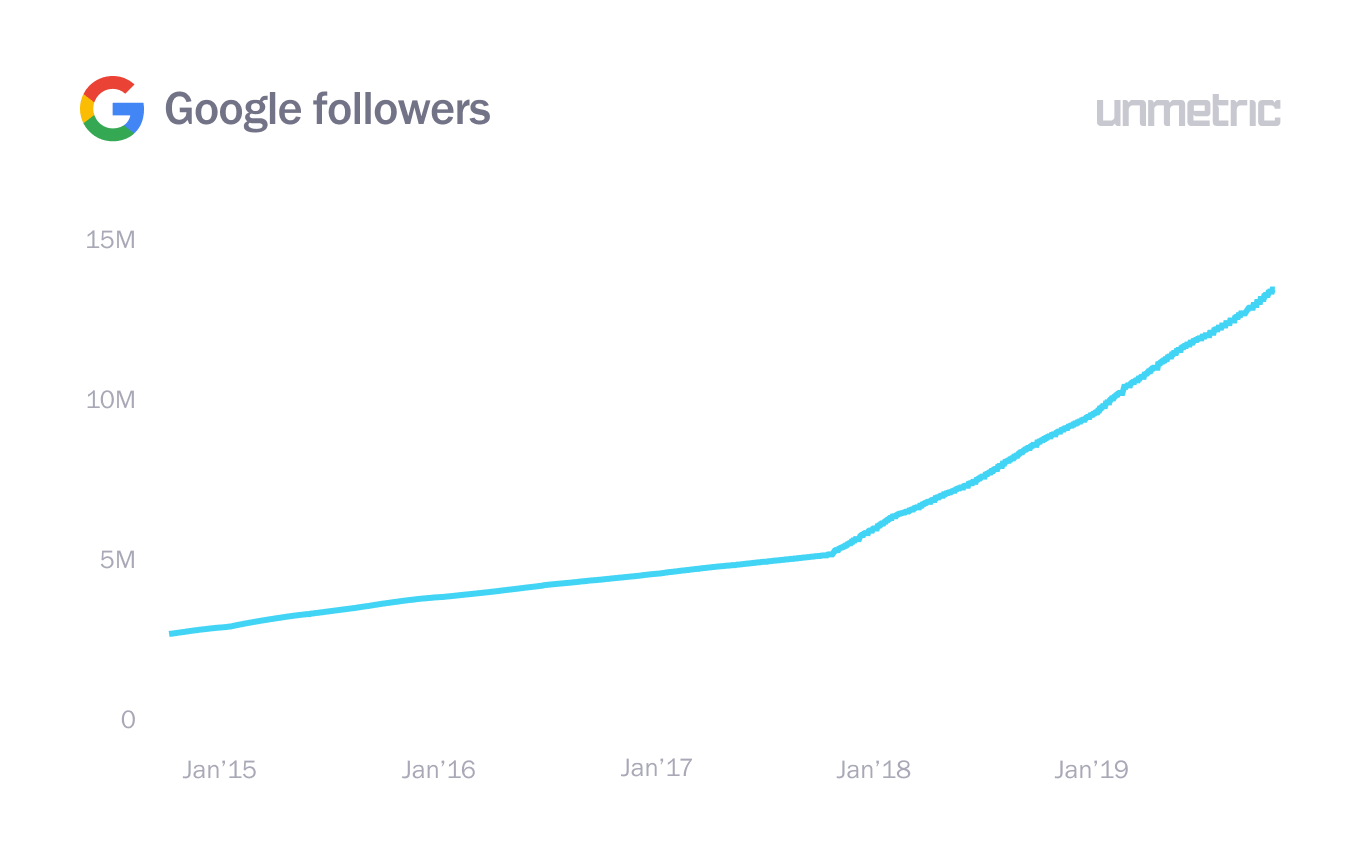 It’s evident from the metrics above that the brand name draws people like a moth to a flame. But that’s not the only reason why Google has a fan following of 13.5 million followers. Google’s LinkedIn page is a source of great content that keeps its audience engaged. CSR initiatives, company culture, product updates, and much more are entwined in Google’s content strategy on LinkedIn. Having its employees at the forefront makes it more relatable and also shows that Google prioritizes its people above others! 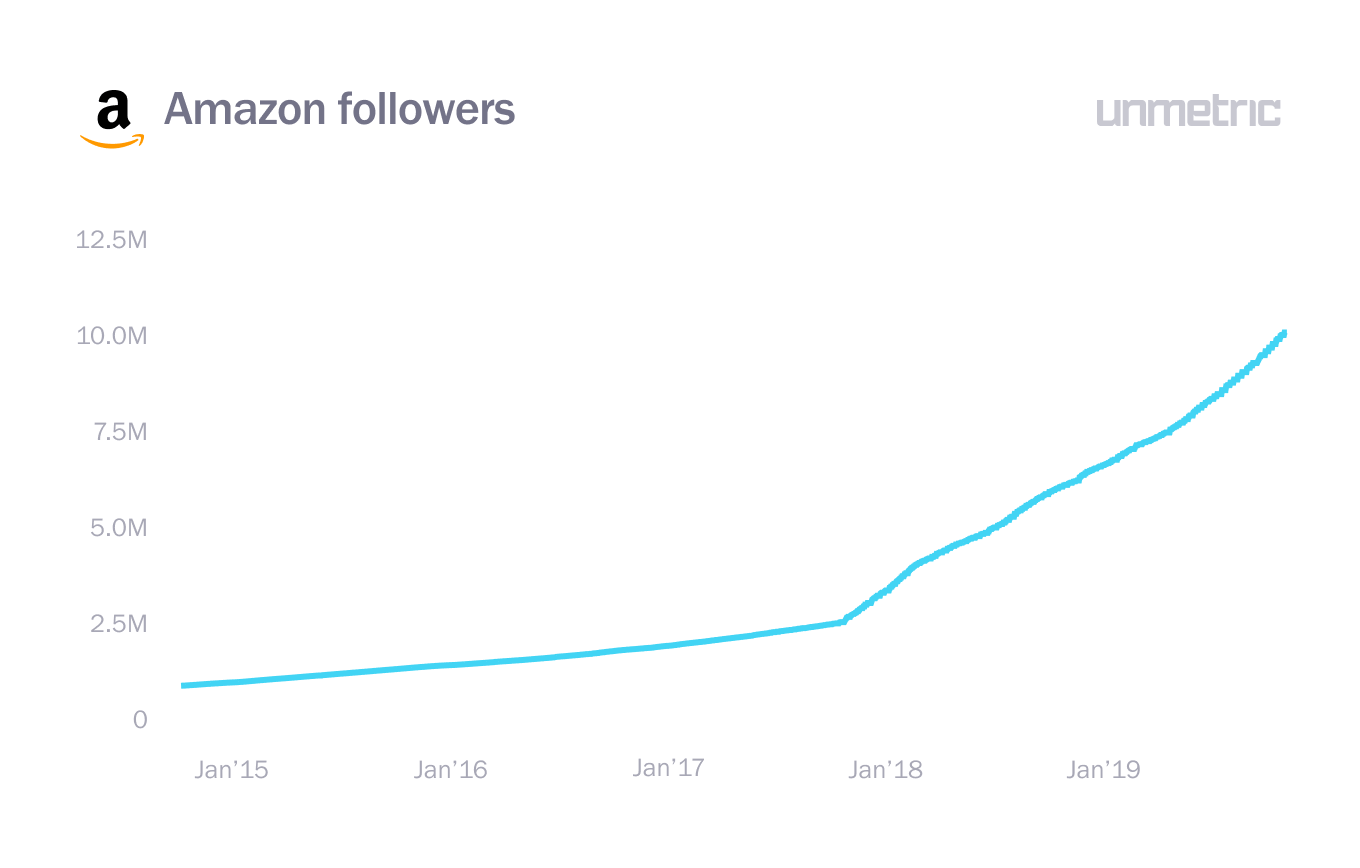 Similar to Google’s people-first approach, much of Amazon’s content showcases its employees highlighting their experiences in working with the organization. The company also provides its audience with information about job openings, company events, and videos on their latest inventions that always win them a ton of engagement.

Having a good content strategy is not the only contributing factor to Amazon’s strong follower base. Almost 200 million people access Amazon on a monthly basis and over 100 million have access to Amazon Prime. Certainly, having a huge consumer base has also contributed to Amazon’s growing popularity on LinkedIn.

LinkedIn practice what they preach and that is why LinkedIn does well on, you guessed it, LinkedIn! The company added eight million followers over the last five years with an average of 4,727 followers added every day. 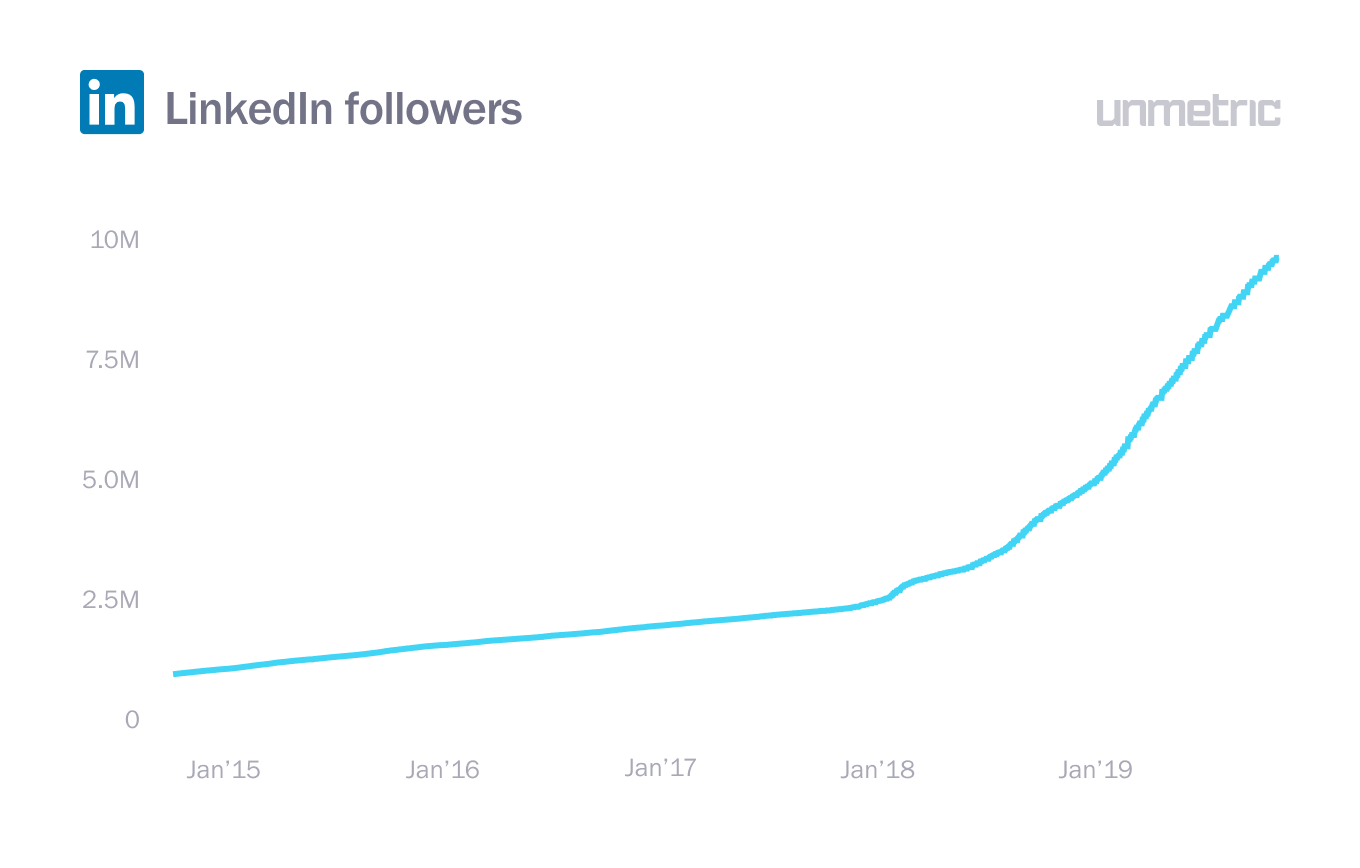 LinkedIn, a great source of useful information that employees, employers, and job hunters seek, is also one of the widely used marketing platforms for businesses. LinkedIn shares a ton of engaging content in the form of short videos and photos on their feed. You can find networking guides, inspiring stories of professionals, and motivational quotes among other things. LinkedIn also interacts with its audience by asking open-ended questions that spark conversations and engagement.

LinkedIn’s parent company Microsoft added 6.8 million followers over the last five years – a 357% growth in followers with an average of 3,684 followers added per day! 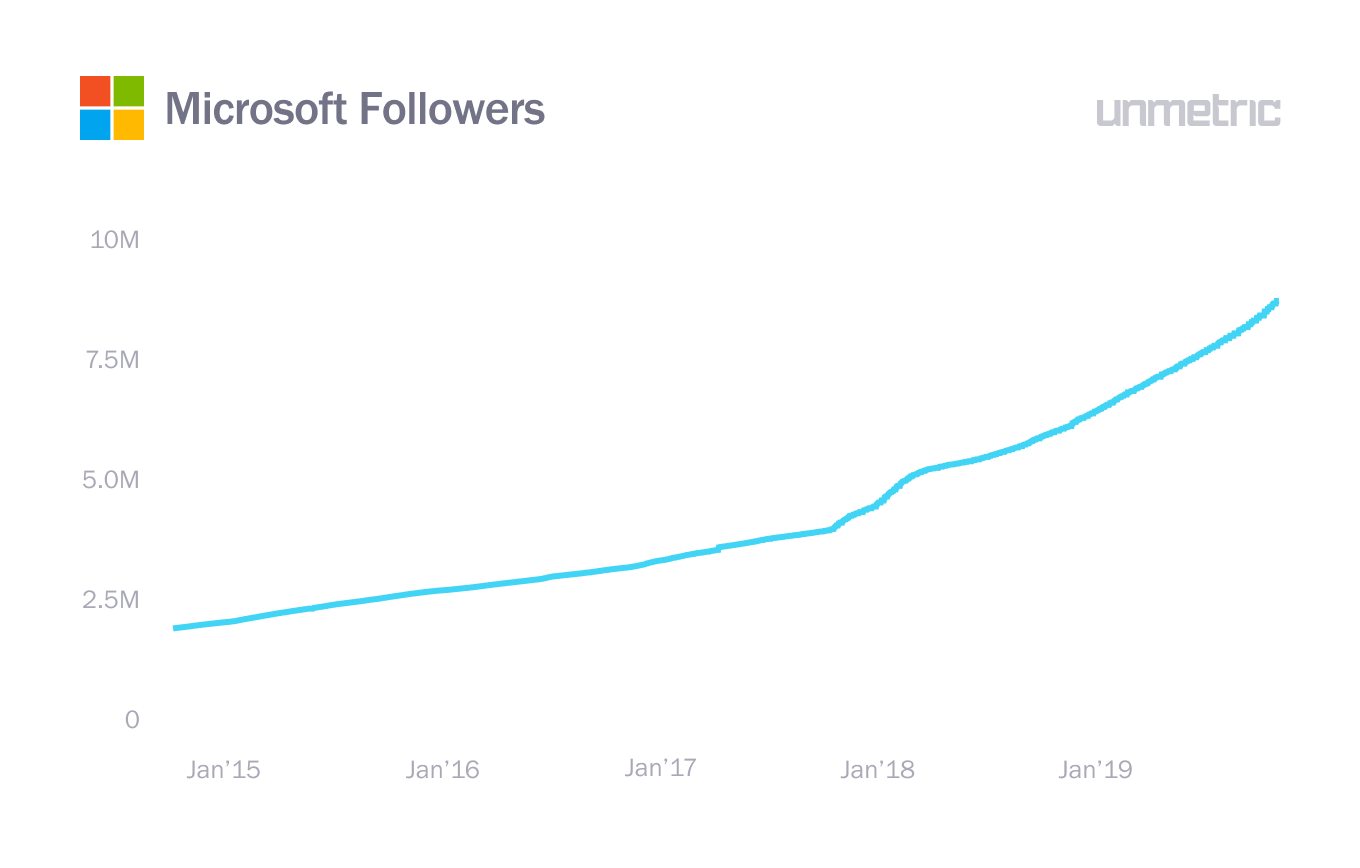 Microsoft’s LinkedIn page has a ton of useful product updates in the form of videos and images that win them a lot of engagement. Apart from that, the company also shares third party content relevant to their business, articles written by their employees and executives and much more. Microsoft also aims at localization marketing by translating a lot of its content based on the region.

Apple is a world-renowned consumer electronics company and also one of the best companies to work for according to LinkedIn’s list of top companies to work for in 2019. But if you head to Apple’s LinkedIn page, you won’t find a single update made by the company since LinkedIn’s inception. This is just not on LinkedIn. Apple has an inactive social media presence across all networks. This might seem a bit bizarre and strange, but the fact is that the company believes it doesn’t need that extra exposure. 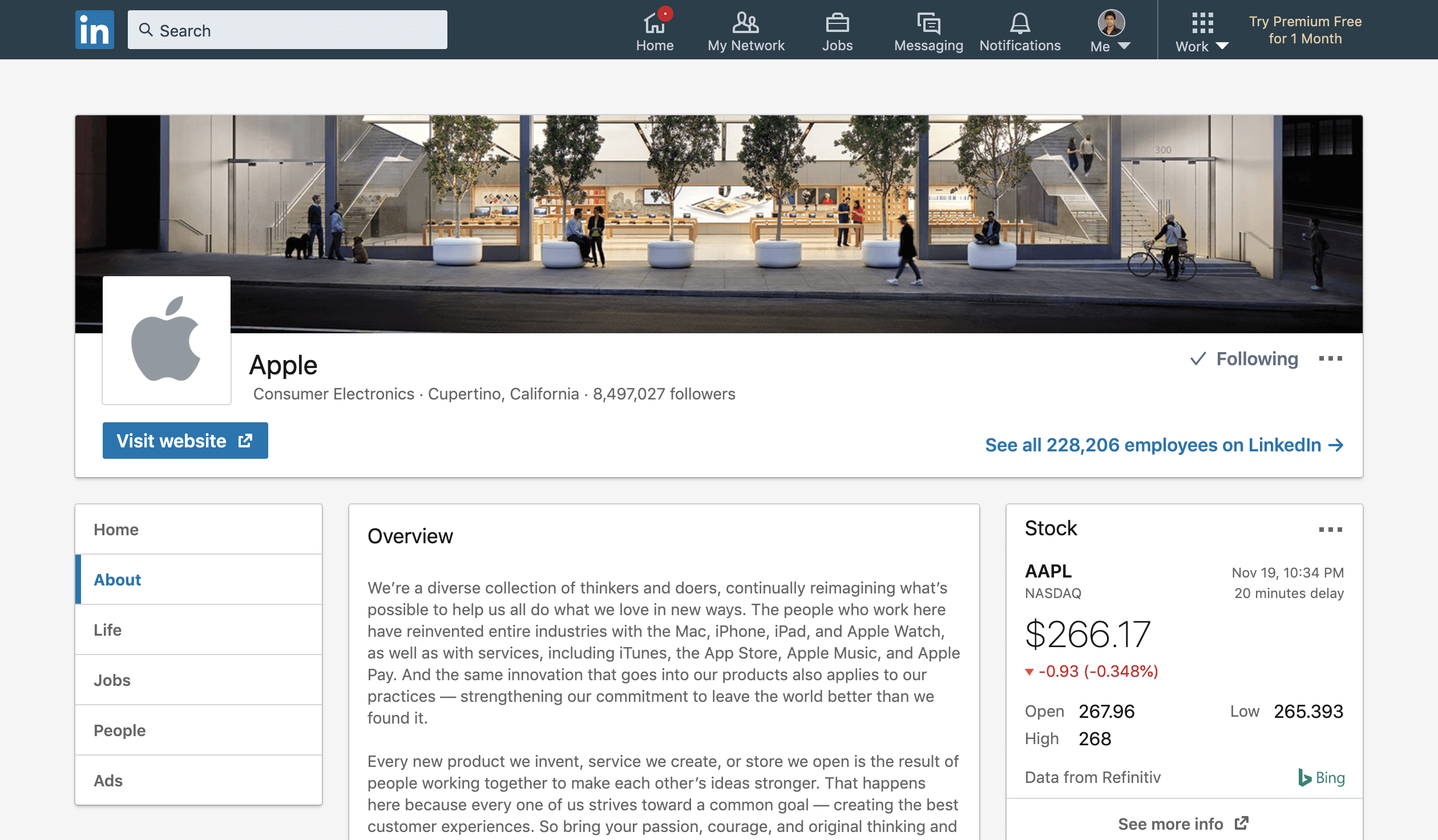 So, how did they manage to gain more than six million followers with an average of 3,423 followers added every day?  While Apple might not be active via organic content on LinkedIn, the company is super active via advertising. Their ads are focused on raising product awareness and meeting their recruitment needs. 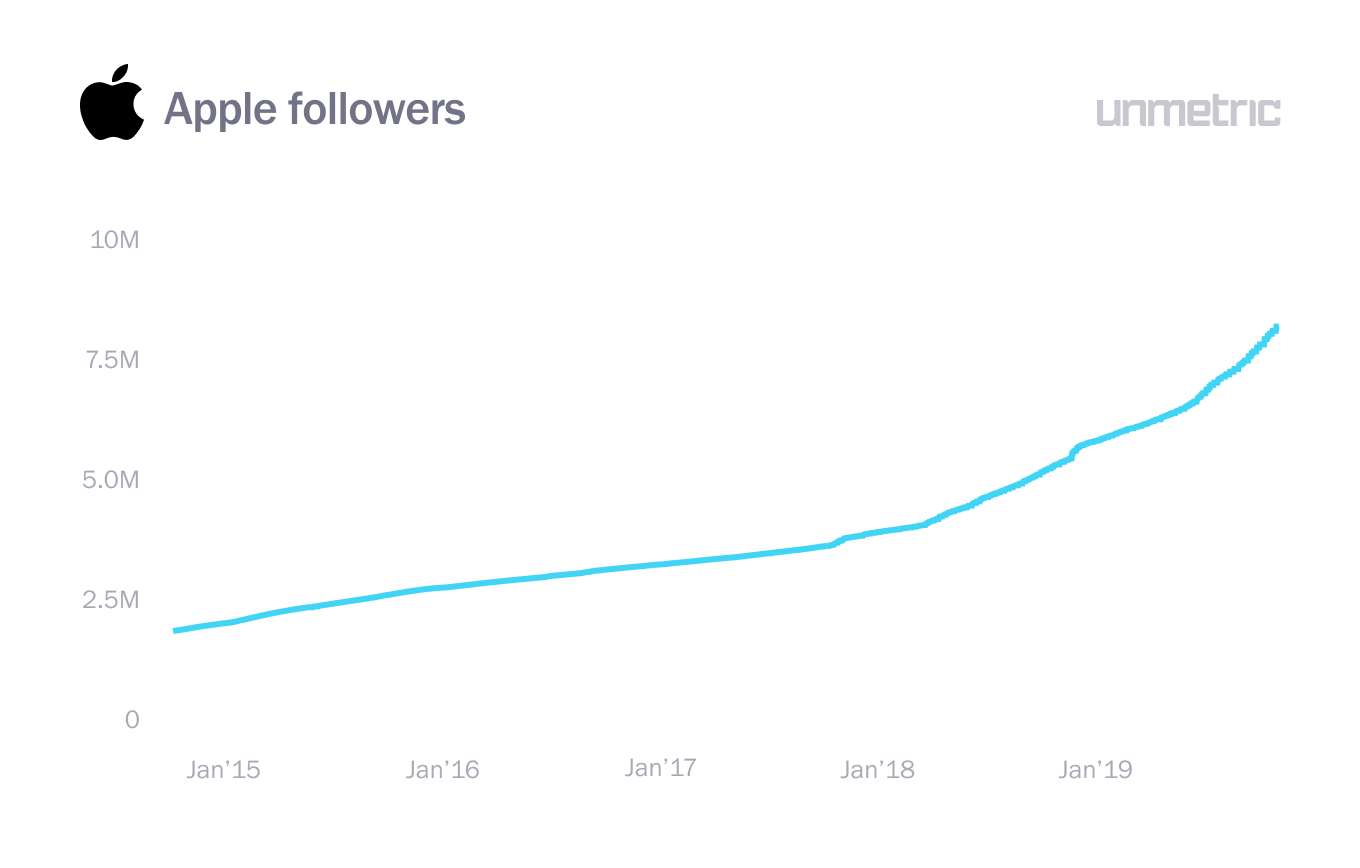 Unilever is a force to be reckoned with on LinkedIn. The company has an array of diverse content focusing on its corporate social responsibility initiatives, talent branding, product updates and so on. Apart from its business initiatives, Unilever also shares its company vision which is translated through the content they produce. What makes Unilever even more lovable is its attention to social and environmental issues. The visual appeal of Unilever’s posts on LinkedIn is a bonus that helps the brand win engagements from its audience.

Like most companies, this renowned food and beverage company also has hiring and recruitment as its use cases on this platform. But that’s not all that Nestle does on LinkedIn. Nestle promotes its company culture, its people, innovations, and its efforts for a sustainable environment which has helped them earn an ardent fan following of 8 million followers.

IBM makes tech sound understandable with its host of informative content on LinkedIn. The company captures the essence of their tech and how it simplifies human lives in short videos that leave you wanting to know more. Employees are a crucial fabric to any organization and IBM believes in that ideology. By having its people at the forefront of its content strategy, IBM makes its followers feel more relatable to the company.

Facebook has now around 2.5 billion users across platforms – despite the bad press, it is gaining popularity. Facebook’s LinkedIn page is all about talent branding. On average, the company posts one post a day and the content that works best for Facebook are photos. Facebook’s content strategy is to highlight its employees, work culture, and also to post about social causes, charitable events, and so on that receive good engagement from their audience.

Accenture has a visually appealing LinkedIn page with content that rallies around tech-related news, latest innovations, employee stories, links to its podcasts, and a ton of video content. Accenture also nails visual branding with its rich purple hues that spark instant brand recall and a lot of engagement.

Oracle is very product-centric on LinkedIn. Apart from that, Oracle also promotes its people, their latest innovations, and social initiatives among other things. On average, Oracle posts once a day and posts with videos engage the best, while those with photos are the most frequent.

Deloitte bagged the third position in the list of top companies on LinkedIn in 2019. The company’s LinkedIn page is a great source of content on what the future of technology is going to look like. People that are passionate about topics like automation, artificial intelligence, facial recognition, and so on can quench their thirst for knowledge by reading Deloitte’s blog articles to which they share the links on LinkedIn. Sneak peeks on company events and life at Deloitte also form a major part of the company’s content strategy on LinkedIn.

This tech giant, best known for its world-class computers and printers, does really well on LinkedIn. You can see a lot of fresh content on HP’s LinkedIn page with quality content on thought leadership, blog articles, and videos on company news and new releases that garner them quite a lot of interactions.

Cisco’s content strategy is a mixed bag that includes owned and third party thought leadership articles, teaser videos of Cisco’s episode series titled #CiscoIdeaLab, talent branding, and much more. Additionally, they also share stories on how they empower other companies and create new initiatives via their products.

And finally, we have Dell with 2.4 million followers. Dell’s LinkedIn page shares a ton of product updates in the form of short videos, and images that win them a lot of engagement. Like most companies, talent branding is also well blended into Dell’s content strategy.

LinkedIn could do a whole lot of good in helping your B2B or B2C business grow—if used effectively. Standing out on the network can be difficult as it works very differently compared to other social media networks like Facebook and Twitter. You need to have some tricks up your sleeve to make sure your content reaches the masses.

Take a look at our LinkedIn Marketing tips and tricks to learn how much content to post, what kind of content formats to use, and much more to get your organic posts go viral!

This report was put together using Unmetric Analyze. Now a part of Falcon.io, the Unmetric platform tracks what over 100,000 brands are saying on social media (with up to seven years of historical data available) as well as how audiences are reacting to it. Clients use Unmetric to help them create better content, get more certainty around their social media strategy, and automate all their reporting. You can see more about Falcon and Unmetric here.